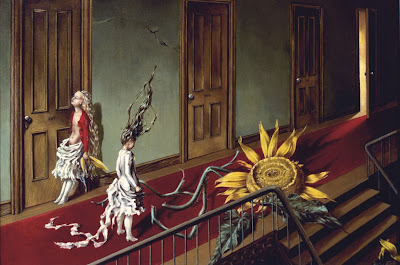 At the end of a meal my beautiful Italian grandfather, who was a shoemaker by trade and a winemaker (all good things come up from the basement), and fantastic cook by heart, would take an apple and knife in his hands and slowly begin to peel it, starting from its base, working his way around the apple until the skin was a continuous spiral that dropped heavy onto the plate, leaving only the naked fruit to be served. Each slice was delicately balanced on the edge of his knife, an offering to all sitting at the table. My memory would normally end with all of us sitting at the table, but meeting Carlos Huber inspired me to continue on and recall my Poppu’s smock perfumed with solvent and leather that he wore in his shop. He would carefully hang it up at the end of the day. He then poured himself a fragrant glass of his red wine, and with his back to the stove, bouquets of dried oregano and peperoncino just a handful away. Somehow our fascinating conversation stirred this memory, even though we didn't touch on it specifically.

Carlos comes to perfumery via his work as an architect and historic preservationist. His unique vision guides what makes him most happy these days, making fragrances. Ever since I met him at the Elements Showcase, I've been struck by his painterly descriptions of his perfumes. It was the first time I have ever encountered anyone talking about fragrances in this way. I asked Carlos to talk in more detail about Arquiste's hyper-directive fragrance descriptions, and if he considered his perfumes to be abstract. His inspiration comes from history, specific stories, scenes and moments in time. He posed the question, if we entered the world, say of a 19th Century painting, would it be different or would it be not that different from what we know. The characters in the painting might be wearing different clothing, and have different hair-dos, but in the end we wouldn't be foreigners in their world. I agreed, It wouldn't be that different, history is not a boring and dusty place; rather we can resuscitate it, allowing us to see the value of the moment in both the present and the past. Carlos was emphatic that his fragrances should be perceived as modern not abstract. Each fragrance was meticulously built around a precise moment in time, and these moments were not to be expanded on. His collaboration with Rodrigo Flores-Roux and Yann Vasnier ensured his exactness.

Infanta en Flor, invites us to hang with Maria Theresa, the Infanta of Spain, June 1660, and smell her perfumed body of Orange flower water; then imagine her waving a scented fan as she catches a glimpse of her man, The King. Infanta is a balanced fragrance, Orange flower water, Immortelle, and Cistus resin meet to create a pleasant floral with a light camphor and amber-like bliss. Carlos calls it austere. L’Etrog, takes us to Calabria, Italy, October 1175, we meet a farmer celebrating the harvest. The smell of his harvested fruit, a mix of flowers and sweat on his clothes, the liquor he drank, and a cabin built of palm leaves in the grove, so he can party all night and get up in the morning and begin to work again. It is a complex Citrus with tenacity. Fleur de Louis, here Orange blossom opens, next Orris brings a violet-powdery rush, and joins with a Jasmine note that stays wonderfully light and modern, the base reads soft, woody, earthy. It represents King Louis XIV, June 1660 and his first look at his bride set in the Basque region at the Spanish/French border. Aleksandr, a beautiful fragrance (influenced by a Pushkin story) is a period film waiting to be made, a story compete with a duel. It starts out cold, its heart of Violet and Balsam reminds me of powdery snow, finally a Leathery note comes along to warm things up. Huber always imagines the pistol has been fired and he sees the trail of smoke coming out of the barrel.

Arquiste also asks us to seek out the personal in history. Flor en Canto, captures an Aztec festival, but for Carlos Canto also brings him home to Mexico City, with its abundance of tuberose that is placed in vases throughout his mother's home. Anima Dulcis is extremely comforting to me, reminds me of tucking my kids in at night. A reverence for Mexican cuisine exists in this fragrance, with its mastery of big bold notes, namely cocoa, vanilla, and chili create warmth and sun. Who would of thought it is based on a restoration of a convent. I love that he calls it a "Baroque" gourmand.

At one point Carlos and I were talking about men wearing floral fragrances, or rather the lack of that. Surprisingly, he said, that even in the niche world, its just not happening that much. That's sad, because I can imagine the entire Arquiste line on either men or women. As we continued, he explained how a flower on a man's lapel was not intended for show, its purpose was to present a woman with something good to smell while dancing. I couldn't help but remember when he greeted me he was wearing something new he was working with, I thought it was Jasmine, but he corrected me. It was Gardenia. It was completely refreshing to smell a floral on a man, an offering and openness for our conversation. Thank you Carlos.

Cafleurebon and The Artist 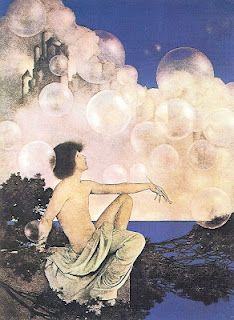 Please take a look at my very first guest post on Cafleurebon. It was a delight working with Mark and Michelyn, and creating a "scent track" for the film, "The Artist."

Hope you enjoy and have wonderful weekend.


Art Credit: Maxfield Parrish
Posted by Valerie Vitale at 7:41 AM No comments: 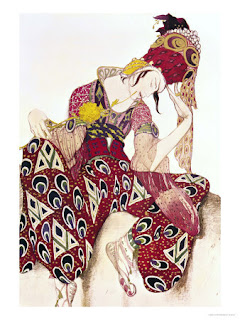 Layering fragrances can bring out the wannabe perfumer in me; I find it requires a certain focus and attention, and dare I say, a spark of inspiration to make it work, and if it does work it creates something that is completely personal. Combining can enhance or hide a certain note or aspect of a fragrance that ultimately creates something new. When my friend and I found ourselves at Jo Malone Boutique on Bleecker Street a few months ago, we were invited back to have a complementary arm and hand massage. So when I arrived yesterday evening, little did I know that I was going to get a chance to layer. As I was smelling Lime Basil & Mandarin, I slowly noticed that the layout of the boutique with its round table that holds most of the collection, creates an atmosphere perfect for smelling and conversation. When my friend arrived, we were asked to find three fragrances that we thought would layer well together, these three fragrances would be used for the three part massage that included a soak and cleanse, a lotion massage, and a final spray. I guess I didn't know until last night that the line's main concept is centered around combining, flocks of people are collecting it just for this purpose. I think the idea of making something of your own out of something that already exists is a smart one, it's sort of like doctoring a boxed cake. So I began to spray and smell and in a fairly quick turnaround, I produced a trio that I was quite happy with. White Jasmine & Mint for the wash, Anise & Vanilla for the lotion, and Rose Water & Vanilla, Cologne Intense for the spray. As I sat and caught up with my dear friend, talking as we do so intensely about fragrance, we were together happily sipping tea and smelling each layer as it was applied; I was reminded in life you have to seek out your little piece of happiness, and for an hour or so I was exactly where I wanted to be.

I browsed the Jo Malone website today and they have layering suggestions for each of their fragrances entitled, The Art of Combining. I'm so happy they don't have this list anywhere in the boutique, I suppose some would find it helpful, but I prefer to work for my fragrance.